Skip to content
“It is not the critic who counts…The credit belongs to the man who is actually in the arena; whose face is marred by the dust and sweat and blood; who strives valiantly…who, at worst, if he fails, at least fails while daring greatly; so that his place shall never be with those cold and timid souls who know neither victory or defeat.”
– Theodore Roosevelt Jr. 26th President of America 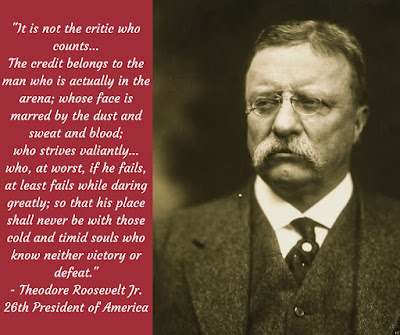 I read this quote about five years ago and at the time I thought what a great quote by an exceptional man, Theodore Roosevelt Jr. the 26th American President.
I found that at that point in my life I was yearning for a change but like most people change is hard and as humans we are creatures of habit so we tend to stick with what we know. I couldn’t stop thinking about this quote however and I found an image on the internet with Theodore Roosevelt Jr. and the quote. I printed it out and laminated it.

I must have read it a thousand times and finally it sunk in and I began to change aspects of my life through actually going out and putting myself in the “Arena”. Fail or succeed I was going to pursue my dreams, goals and design my own lifestyle.

The laminated quote sits on my bed side table, it even travels overseas with me and reminds me daily that you deserve only what your’e willing to fight for, fail or succeed it doesn’t matter.

I hope you find this as motivating or inspiring as I have and I hope that it may resonate with one or more of your readers and help them change their life.


Daniel Trani is an eCommerce entrepremeur/stay at home dad. Together with his wife they are changing their lives to achieve a more family balance life. Their three year old daughter has helped inspire the businesses that they have started which include www.violetandlily.com.au and www.sleepybeans.com.au

Family is very important to Daniel and even more important is the time you spend with family. Being able to travel and show their young daughter new things has inspired them to dream big and work to achieve the lifestyle they desire.
Want more stories like this? Subscribe to our newsletter here…